How does Ranked Choice Voting work?

For more on the background of RCV and current state legislation, see Ballotpedia's overview page. 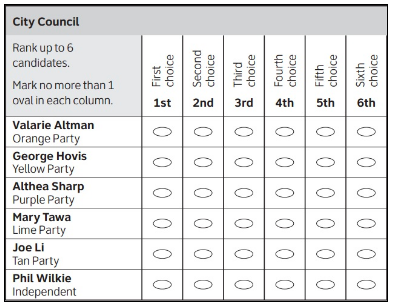 What's the math behind this?

Thanks to HS Mathematics teacher, David Harvey for this explanation!

A voting method is a procedure by which we take the preference lists of individual voters (i.e., a ranking of the candidates) and generate from them a preferred choice (i.e., a winner).  Any such procedure is call a social choice function, and the field of social choice theory concerns itself with the strengths and weaknesses of various procedures.

There are many mathematical properties that are desirable for any voting system, such as:

What then are the benefits of ranked choice voting (RCV) over our current system when there are more than two candidates?

There are other properties, some non-mathematical, that do make RCV desirable, such as:

The upcoming 2021 NYC primaries will use RCV for the first time.  Sixteen other states have adopted RCV for upcoming local elections, and Maine was the first state to use RCV for a presidential election in 2020.